A couple of days ago John Knifton posted a story about a disused tin mine in Cornwall. The striking photo for me was the old chimney. I am a bit of a fan of old chimneys and I have often thought about some that are within walking distance of where I live now. So herewith are a few shots of chimneys in Ballarat – and if you don’t like ’em then blame him, not me.

PS. I know Derrick reminds you every day, but click on the picture to see it full size. (And if you wanna see what I see look at it on your desktop for goodness sake.)

So just a short walk down to the corner and turn left. 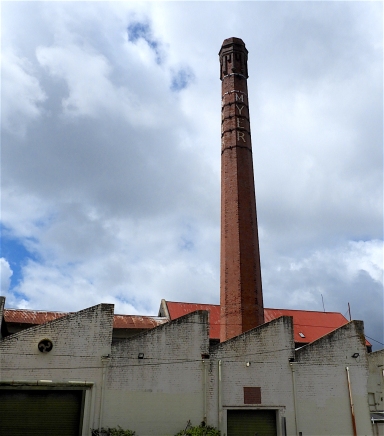 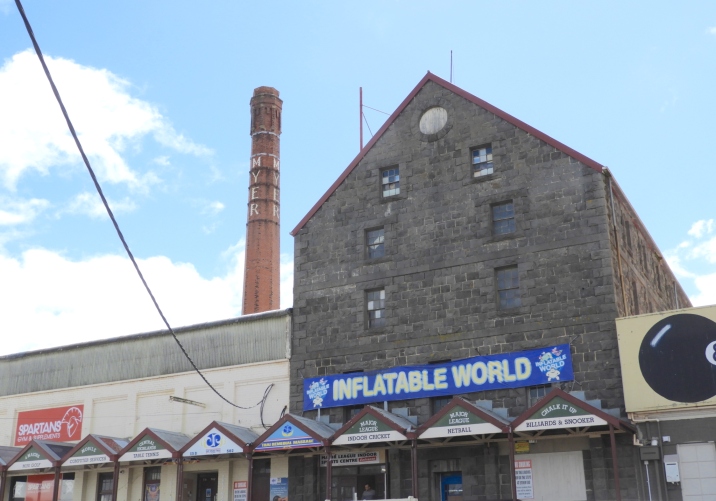 The chimney from the long gone Myer Whisky Distillery as it looms over the original bluestone building which is now a sports’ centre. Myers’ distillery was established in the 1860s.

The Myer buildings became the Myer Woollen Mill which continued until 1975.

In 2016 the Kilderkin Distillery was established. It’s probably a bit early to go and visit.

In the same area, and visible, not from my bedroom but from my computer desk is the old Morley Mill.

‘Among British manufacturers who have decided to open works in Australia is the firm of I. and R. Morley, hosiery manufacturers, of London and Nottingham, who have been established in England for 120 years. They will open in Ballarat (Victoria). A senior member of the firm, Mr. Claude Hope Morley, is a brother-in-law of Lord Hobart, who arrived in Australia on April 10, and has been making careful inquiries as to the best locality for starting the enterprise. It has finally settled on Ballarat as the manufacturing centre.’ [2] 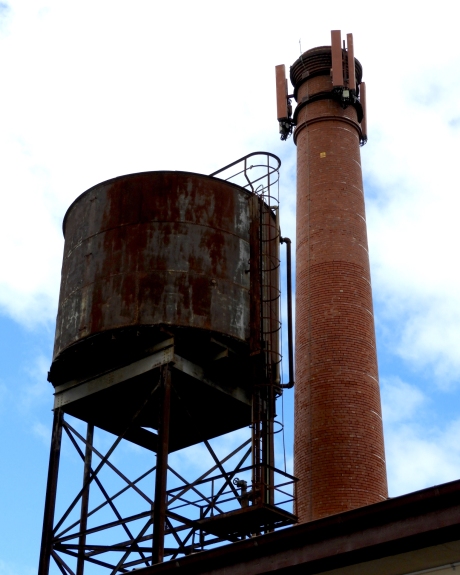 Although the chimney no longer smokes it is useful for holding radio/wireless communications equipment.

Another short walk along Howitt Street is the Selkirk brick factory. Selkirk bricks traces its origins back to 1854, when Robert Selkirk I and his family migrated to Australia from Scotland. In 1883, Robert Selkirk II started to make clay bricks by hand at Allendale, about 25 km north of Ballarat, in response to the building boom resulting from the Ballarat gold rush. He subsequently acquired brickmaking equipment and, in 1900, moved to the current site in Howitt Street.

Part of the factory. 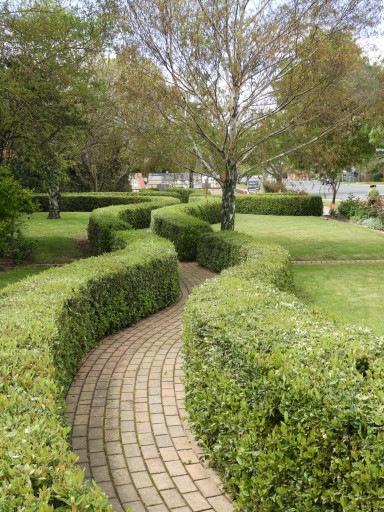 The garden in front of the factory. 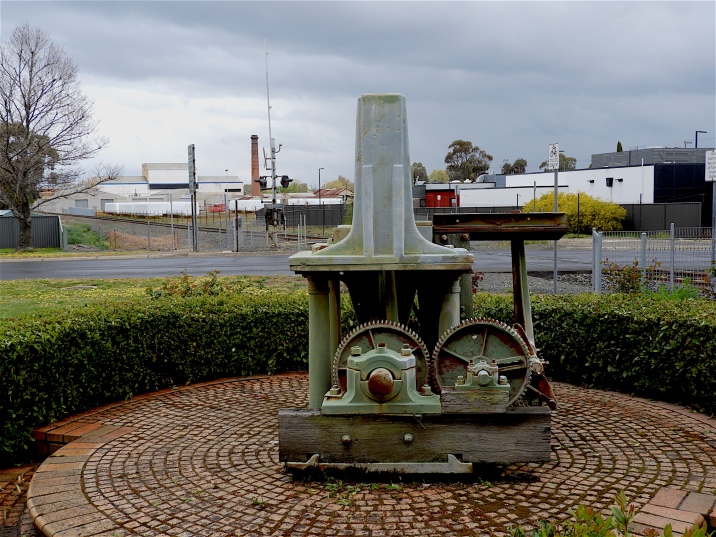 An old brick press proudly standing in front of the factory. In the distance is the next chimney I will visit.

OK, Let’s turn left out of Howitt Street and head for the Victorian Railways Workshop where carriages are made for the Melbourne metropolitan network.

The workshops were opened in April 1917 by the main rail operator in Victoria, the Victorian Railways. This was because of pressure from rural politicians for decentralisation. The railways weren’t too happy because it was seen to be the more expensive option. But they were opened and they are still here. 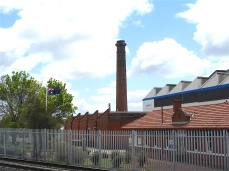 Now we have a short walk down Creswick road to the Bunnings Hardware supermarket. There in the car park is another brick chimney.

This is all that remains of the Martin Stoneware Pipe Company which was originally a pottery started by a George Marks around about 1860. He had come from London but I have been told he trained at the Doulton pottery in Staffordshire.

One more little walk before I turn and go back home.

At the junction of Creswick Rd and Doveton St Nth, (my street) there is another quite beautiful example.

The bluestone base and the cement capping marks this structure for special mention. 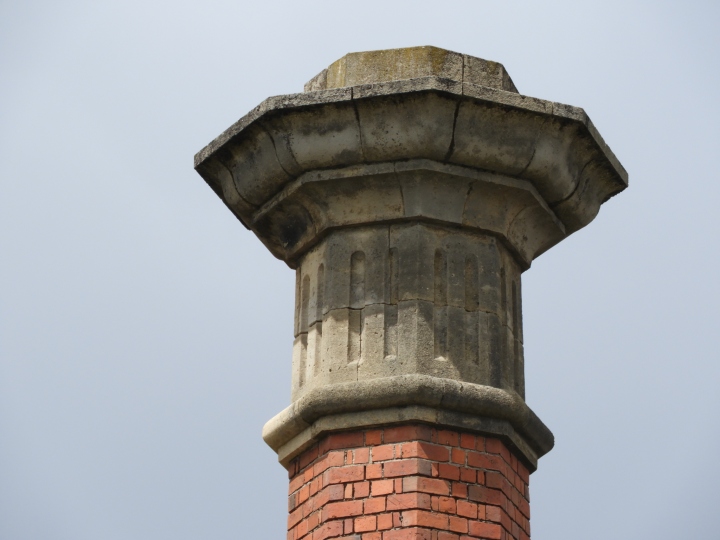 This however is not a chimney/smokestack. This is a vent over Gnarr Creek. The creek flows from Lake Wendouree into the Yarrowee Creek which is the main stream running through Ballarat. In the event of a heavy downfall the pressure on the creek which flows under the road could cause extensive damage to buildings in the vicinity.

That is the end of the walking tour. My sore knee and the resultant pain in my back mean that I need to sit down with a warm cup of something. da di da di da…..

Now I need to drive because it is a bit further away. And don’t worry, I only had a small one.

Just one street south of Sturt St which is the main street there used to be two important establishments. These have now been taken and remade into the technical college section of Federation University.

First to be introduced is the old Ballarat Gaol. 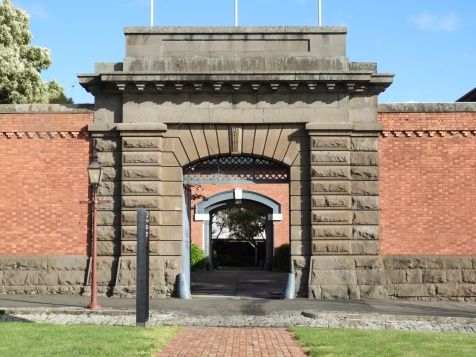 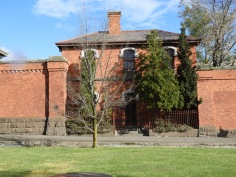 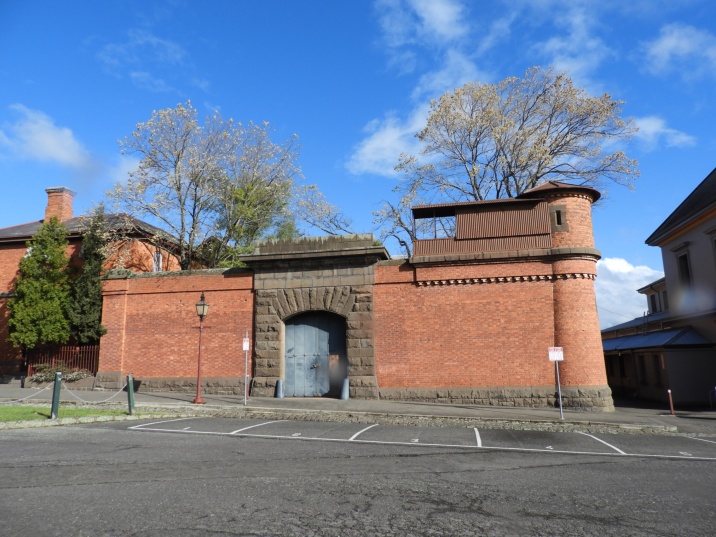 I could take you for a long tour but this post is about chimneys. And for the chimney we have to turn around 180° from where I stand to view some parts of the old Ballarat Brewery.

There it is; the chimneys stack for “Ballarat Bertie”. 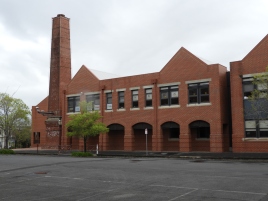 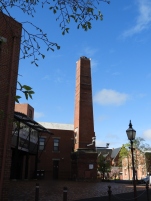 One more chimney to see. The old Coal powered Power Station that has been decommissioned a long time ago and I don’t not got no info. Bugger!

So the beautiful building is in need of a loving owner but I know for sure nobody in “the ‘rat” will ever let that chimney be blown away.

And it isn’t falling over to the left. It’s just that it’s too tall to get into my camera without looking up. Least not until I drove up to the top of the hill.

So one final shot of me finishing off the day.

That’s my own brew.