I want to tell you a true story that I made up a long time ago when I knew the difference between right and wrong. It’s a very short story but to drag it out as long as I can I’m going to show you some pictures as we go.

This is a picture of Lake Burrumbeet which is very close to where I used to live back when I made up this true story. Now if you go down to the east end of the lake – which is really a stupid thing for me to say because only I know my east from my west – anyway as I say if you went down to the right hand end of the lake over where the clouds are all fluffy and white you will get to the place where the Burrumbeet Creek enters the lake and that’s how it gets its water in it.

Now you can’t see which way the water is flowing because it’s a still shot so I’ll tell you that upstream is to the right. And because this creek has an important part to play in the story I would expect you to follow me upstream.

The further up stream we go we come to a ford where you can drive across the creek without getting your shoes wet. And if you stand on the ford which is a concrete structure that you will see in a moment you will be able to see a deep pond beneath the branches of a gnarled and twisted old red gum – Eucalyptus camaldulensis. I stood on the concrete structure and looked upstream to take the photo of the pond.

Here, below is that pond.

And below is a closeup of the gnarled and twisted red gum from upstream. 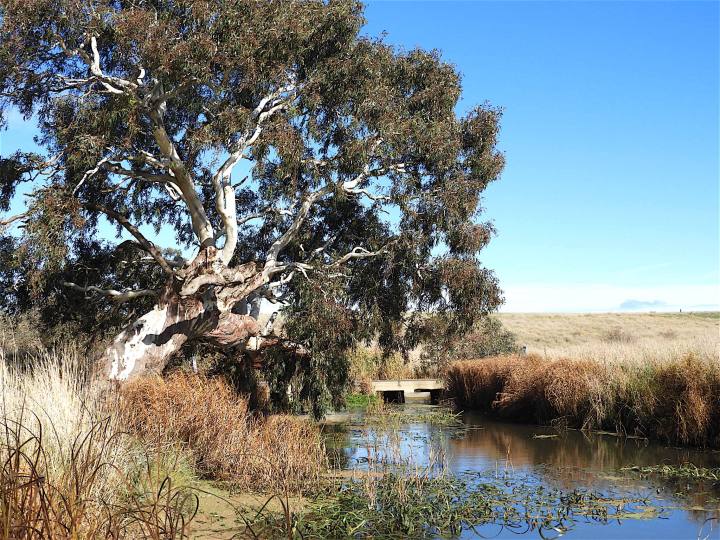 This little falcon has nothing whatsoever to do with the story. It is what is known in the profession as a photographic interlude.

But back to the story.

It is against the law in Australia to set a barrel net in a creek because although such a net is very good at catching fish it is also good at catching platypuses. And because a platypus is a mammal it needs to breathe and if it is in the net it will die. Now some ignorati are tempted to pluralise the word ‘platypus’ as platypi. That’s because they think that it is a Latin word but it isn’t. The root of the word platypus is Greek and so technically the plural should be platypodes which isn’t used because it is very uncomfortable.

Sorry, I got a bit distracted.

However one day I set my illegal trap in the creek right under that big gum tree. If you have forgotten what it looks like here is another shot.

So I sat quietly, smoking a cigarette – I did used to do some bad things when I was younger than I am now – and I waited for the fish to swim in.

But unbeknown to me and hiding in the long grass which is out of the shot but a bit of the way to the left, was an inspector from the Fisheries and Wildlife Department who had been waiting for a long time to catch the dastardly fellow who owned the trap. So he waited because he needed the person who owned the trap to have it in his hands. As time went bye – actually about an hour – I decided to pull the trap out of the water. As I did so the Fisheries bloke jumped out and grabbed me.

Unless I could come up with something clever I was in big big trouble.

So I turned to the Fisheries bloke, looked at his uniform and his hat and said, “Oh boy! You gave me such a fright. But I am so glad it is you.”

“Yes I know. But I thought you were the fellow who set the net. If he caught me he’d have killed me.”

So that’s the story and to put your mind at ease I’ll give you one more look at the idyllic fishing spot under the idyllic red gum in the Burrumbeet Creek.